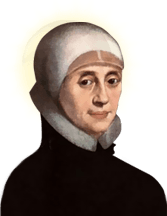 Foundress of the Congregation of Jesus

We, the Sisters of the Congregation of Jesus have, as our inspiration and inheritance, the vision of Mary Ward, who is our Prophetic Foundress (1585-1645).

Mary Ward was born on January 23rd 1585, in Elizabethan England, at the time of the great religious intolerance. As a woman of great faith that she was, she saw the need for a sound religious education for young women who would assume responsibilities in society and in the church, for she said, “women in time to come will do much”.

A woman of vision, Mary saw the potential of women and the need for their education. In 1609, she left her homeland with a small group of companions to open a school at St. Omer (now in France) where girls were taught reading, writing and sewing, as well as the principles of Christian life.

From this modest beginning came Mary Ward’s world-wide congregation, its two branches known today as the Congregation of Jesus and the Institute of the Blessed Virgin Mary (Loreto Sisters). This work expanded throughout five continents. In 1853 this mission was started in India, Patna. She had a passionate love for Integrity, Justice and Freedom and she consistently endeavored to live out these qualities. She died on 30th January 1645.

The inscription on Mary Ward’s tombstone sums up the life of a woman who was ‘Wholly God’s:

To love the poor

Persevere in the same

live, die and rise with them

was all the aim of Mary Ward

who lived 60 years and eight days

Years have gone by and, century after century, hundreds and hundreds of women, follow the footsteps of our Foundress Mother Mary Ward.

For over four hundred years, we have been educating the leaders of tomorrow.

Our Foundress Mary Ward said “Women in time to come will do much”, and her faith in what could be achieved through the education of girls and young women has proved to be well founded.

Mary Ward (23 January 1585 – 30 January 1645) was an English Catholic nun who founded the Institute of the Blessed Virgin Mary. She was declared "Venerable" by Pope Benedict XVI on 19 December 1959; this is the first of three steps on the path to being declared a saint.

Mary's first word was Jesus which was the sign of things to come. Mary was born at a time of great conflict for Catholics in England. She was born in Ripon and in 1595 her family home was burned down. As the home was burning, Mary and her sisters knelt down and asked the intercession of the Blessed Virgin Mary; the children were saved by their father. In 1599 she moved to the house of Sir Ralph Babthorpe at Osgodby, Selby. It was there at the age of 15 that Mary felt called to the religious life. She entered a convent of Poor Clares at Saint-Omer in France as a lay sister in 1606 and the following year she founded the Convent of Poor Clares at Gravelines a house for English women at nearby Gravelines.

However, she did not find herself called to the contemplative life and instead decided to dedicate herself to active ministry, whilst still being a religious; this was considered most unusual at the time. At the age of twenty-four she found herself surrounded by a band of devoted companions determined to work under her guidance. In 1609 they established themselves as a religious community at Saint-Omer, and opened schools for girls.

Although the venture was a great success, it was a novelty at the time, and it called forth censure and opposition as well as praise. Her idea was to enable women to do for the Church in their proper field, what men had done for it in the Society of Jesus. The idea has been realized over and over again in modern times, but in the 17th century it met with little encouragement. Un-cloistered nuns were an innovation repugnant to long-standing principles and traditions then prevalent. At that time, the work of religious women was confined to prayer, and such work as could be carried on within the walls of a convent.

There were other new startling differences between the new institute and existing congregations of women; freedom from: enclosure, the obligation of choir, wearing a religious habit, and from the jurisdiction of the local bishop. Moreover her scheme was proposed at a time when there was division amongst English Catholics, and the fact that it borrowed so much from the Society of Jesus (itself an object of suspicion and hostility in many quarters) increased the mistrust. Measures recognized as acceptable in modern times were untried in hers, and her opponents called for a statement to be made by Church authorities. As early as 1615, the Jesuit theologians Francisco Suárez andLeonardus Lessius had been asked for their opinion on the new institute; both praised its way of life. Lessius held that local episcopal authorisation sufficed to render it a religious body whereas Suárez maintained that its aim, organization, and methods being without precedent in the case of women, required the sanction of the Holy See.

Pope St. Pius V (pope from 1566–1572) had declared solemn vows and strict papal enclosure to be essential to all communities of religious women. To this law the difficulties of Mary Ward were mainly due, when on the propagation of her institute in Flanders, Bavaria, Austria, and Italy, she applied to the Holy See for formal approbation. The Archduchess Isabella Clara Eugenia, the Elector Maximilian I, and the EmperorFerdinand II had welcomed the congregation to their dominions, and together with such men as Cardinal Federigo Borromeo, Fra Domenico de Gesù, and Father Mutio Vitya, General of the Society of Jesus, held the foundress in great esteem. Paul V, Gregory XV, and Urban VIII had shown her great kindness and spoken in praise of her work, and in 1629 she was allowed to plead her cause in person before the congregation of cardinals appointed by Urban to examine the situation.

The "Jesuitesses", as her congregation was designated by her opponents, were suppressed in 1630. Her work however was not destroyed. It revived gradually and developed, following the general lines of the first scheme. The second institute was at length approved as to its rule by PopeClement XI in 1703, and as an institute by Pope Pius IX in 1877.

At the express desire of Pope Urban, Mary went to Rome. It was there that she gathered around her the younger members of her religious family, under the supervision and protection of the Holy See. In 1639, with letters of introduction from Pope Urban to Queen Henrietta Maria, Mary returned to England and established herself in London. In 1642 she journeyed northward with her household and established a convent at Heworth, near York. She died in St.Mary's school.

After her death in Heworth, near York, her companions thought it best not to bury her body near the city centre where she died because of the dangers of desecration. Instead they sought somewhere less conspicuous and found a happy solution by arranging for her to be buried inOsbaldwick Churchyard, about a mile away. There, as the record says, 'the vicar was honest enough to be bribed'! Her burial on 1 February 1645 was also attended by Anglicans. Despite the persecution of Roman Catholics at the time, Mary Ward was much admired and revered by many local people.

She was mentioned by Pope Benedict XVI during his UK visit.

Mary ward was born on 23rd January 1585 in Yorkshire, England. Her parents were Ursula Wright and Marmaduke Ward. She grew up at a time when English Catholics suffered persecution, loss of property, honour and even life for the sake of their faith.

At the age of fifteen Mary first began to feel that she wanted to become a religious. One day, as she sat sowing with Margaret Garett, a most trusted servant of the household who told her stories about religious life Mary received light from God on the excellence of the religious life and decided to embrace this state of perfection.

Soon she began to practice forms of asceticism, read spiritual books and above all, prayed a great deal, fasted and undertook stricter forms of penance by interior and exterior mortification.

Slowly Mary’s conviction strengthened that she must enter religious life on the continent in the strictest monastery. Her confessor, family, relatives and friends came to know of the direction Mary was taking.

In 1606 Mary being 21 then, left home with her confessor’s approval and parents’ consent, accompanied by Mrs. Bentley, the great grand-daughter of St. Thomas Moore to whose care she had been entrusted. She took the ship to St. Omer, sailed from Dover to Calias and then covered the remaining 40 km to St. Omer on horse back.

The Glory Vision – 1609 The Glory Vision marks the beginning of Mary’s mission to found the Institute. She now knew that the one aim of her life was the praise and glory of God in everything.

Coming together of the First Companions During her stay in England, Mary came to know several likeminded young women from noble families, who wanted to live a spiritual life with her in an apostolic community.

Take the Same of the Society - Saint Omer-1611 So far Mary Ward and her companions had no clear picture in mind of what might develop out of this apostolic beginning. But after this time of practical experiment, God showed them the next step, and gave them more clarity in 1611.

Initiating a New Way of Life Mary Ward was initiating something new in the church. In spite of the clouds gathering in the horizon, of being misunderstood by the Jesuits as well as the secular clergy, Mary was convinced that she had understood God’s will, and kept the courage even though in great isolation.

Mary’s health failed rapidly from 15th January. On 25th January, raising herself cheerfully she spoke to them comforting words. The day before she died, seeing their grief Mary said to her companions “Oh fie, fie, what, look sad! Come let us rather sing and praise God joyfully for all his infinite loving kindness.” Then she started off a hymn of praise and thanksgiving. They all joined, trying to hold back their tears.

“Then she gently kissed the crucifix in her hand saying softly, “Jesus, Jesus, Jesus,” and bowed her head without a sound and passed from this world to the infinite peace of God. On 30th January 1645, at 11 o’clock or thereabout our dearest Mother departed this toilsome life at the age of 60 years and 8 days”.

Mary Ward’s life’s purpose and goal, summed up on her grave stone, points to the fire that burned within her for God’s service. “To love the poor, persevere in the same, live, die, and rise with them was all the aim of Mary Ward who having lived 60 years and 8 days died on 30th of January l645. She was buried in the small cemetery of the Anglican Church of Osbaldwick near Heworth

Mary Ward’s Foundation lives on today Mary Ward died surrounded by a small band of faithful companions who shared her vision and with houses only in Rome, Munich and London. She bequeathed her dream to these gallant women because of whom the Institute survived and no doubt it was God’s work too. Today her foundation lives on world-wide in forty four countries, across five continents, under the names Congregation of Jesus and Institute of the Blessed Virgin Mary (Loreto's) with about 3000 members.